Babe Ruth, in addition to his claim as (probably) the best baseball player ever, was a prodigious beer drinker with well-developed and modern views on the combination of water, hops, yeast, and barley.

The man really cared about the brewers, not just the beer. Here’s something he said once:

“Sometimes when I reflect on all the beer I drink, I feel ashamed. Then I look into the glass and think about the workers in the brewery and all of their hopes and dreams. If I didn’t drink this beer, they might be out of work and their dreams would be shattered. I think, ‘It is better to drink this beer and let their dreams come true than be selfish and worry about my liver.’”

Babe Ruth was not selfish when it came to beer. But you probably are.

For 2019 beer drinkers, February is actually #FlagshipFebruary, a campaign started by a national beer writer (how can I get this job) bemoaning today’s consumer. He wrote on Twitter:

“In the spirit of alliteration, how about we make next month Flagship February!?! The focus would be on drinking faves from the early years, not necessarily exclusively, but frequently. The brands would get a boost and drinkers would be reminded of what got them here.”

Why? Beer drinkers are increasingly chasing new, stupid (*coughglitterbeercough*) trends and small-batch releases so often that it’s hurting brewers. Brewers rely on the sales of their popular flagship product to experiment on weirder, more expensive brews; when we don’t drink those as much, breweries suffer. And thus ends my crude lesson in economics.

Point is: #FlagshipFebruary exists to encourage consumers to drink their favorite brewer’s flagship beer. How can DC-locals help? Here’s your guide to the seven area-flagship beers you should be drinking in February in honor of Babe Ruth, a seven-time World Series champion.

A note: I did my best to vary this list by style. And where I had my own doubts about which beer was a given brewery’s flagship, I turned to Untappd and defaulted to the beer with the most check-ins.

Like it’s name suggests, Rowdy packs an aggressive, malty flavor. It’s not a beer you’ll be drinking a lot of (unless you’re looking to get, well, rowdy), and its hop-forward profile might scare some away, but this is the beer I’d choose when I can feel the winds of the Polar Vortex though my town home’s brick walls.

Surely one of the most omnipresent brews in the DC area, The Public is, personally, not my DC Brau of choice. And yet! It remains one of DC Brau’s bestsellers and surely makes many people happy. Drink it!

If this beer is on the menu of your local watering hole, you could do way worse than to knock back this hoppy pale ale. If your favorite IPA and Pale Ale had a baby chances are it would look and taste something like this. Plus, it’s a cool thing to say when you order something … I’ll have a Raised By Wolves, please.

I’m a sucker for farmhouse ales and other saisons so 3 Star’s Peppercorn brew quite tickles my fancy. A slight sweet with a dry finish, this is the beer I’m drinking when Happy Hour starts at 5 until it ends at 7. At that point, I’m popping the top on a 3 Stars Ghost White IPA with dinner.

For a while, this beer was on the Happy Hour menu at Momofuku CCDC. For a while I was at that bar every other Wednesday and not not for this easy-drinking Kolsch from the smallest brewery on our list.

Look, not all of our area’s best beer is produced in the District, but you knew that. Alexandria-based Port City puts out almost nothing BUT good stuff, led by this slightly-citrusy, highly-drinkable white ale. If you bring this to a cookout anywhere in the DMV, you’re a hero and should be treated as such.

The grand-daddy of area craft brews, chances are you supplemented the light beer-fueled pregames of your early 20s with a sixer of this, easily found wherever alcohol is sold. Drink two, your pregame was perfect; crack a third and all bets were off. You probably haven’t revisited Raging Bitch in a while, and why would you when the last time you drank it you ended up stuck to the floor at McFadden’s. Well, I’m here to tell you to give it another drink because you’re a better person now–and also that McFadden’s is closed permanently, so don’t worry. 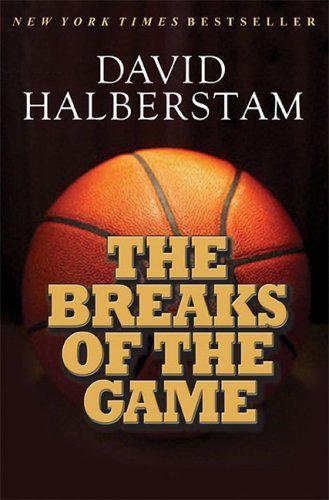 The Breaks of the Game, David Halberstam